While LoRa and LoRaWAN have penetrated the IoT world, providing an easy-to-use long-range communication solution, computers are by and large ignored. Rare is the laptop with a LoRa module included. But some solutions have started to pop up, at various price points. I have been making custom LoRa USB dongles for a while now, connected to either my laptop, or a Raspberry Pi, providing a great alternative to squinting at minuscule OLED displays. Most of the time, they're set up to work from home, yeah them too..., as transceivers in a PING/PONG scheme. But sometimes, they make for a convenient test platform as receivers: sit outside with a laptop, send commands, log results, etc.

Wisblock has made it not only possible, but easy. I have two kinds of dongles, with custom software either on the computer (managing the LoRa module's AT firmware), or on the LoRa module, doing most of the work, whereas the computer is just a dumb terminal. Today we're going to do the latter, making a simple custom firmware for the RAK4631-R, ie with RUI3.

We will need the following:

A RAK4631-R in a frequency range that's allowed in your country. 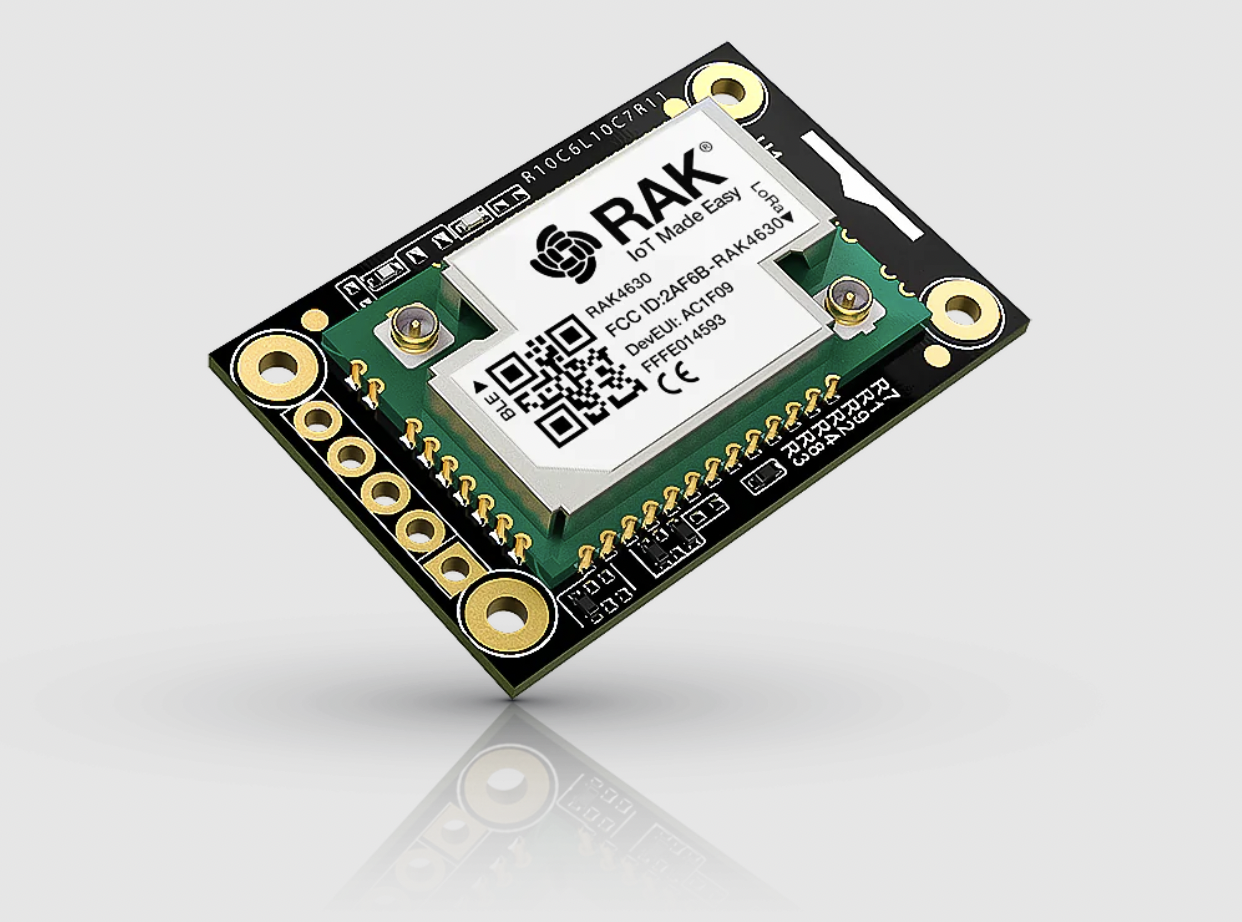 The RAK4631-R WisBlock LPWAN is a WisBlock Core module which delivers a powerful Nordic nRF52840 MCU with BLE 5.0 paired to the latest LoRa® transceivers from Semtech, the SX126x series.

(Note that we could also use RAK3172 for this, as RUI3 code compiles for both – as long as you are using supported features: eg BLE and hardware encryption are not supported for RAK3172. But here we are going to encrypt our LoRa packets, and adding AES128 to the code would go beyond the scope of this article.)

And that's it. At least for a basic setup. We could of course spruce it up with a custom application on the computer, but again that's beyond the scope of this article.

A dongle basically needs two working modes: a transmission mode and a setup mode. Contrary to AT firmwares, which are essentially single-mode, ie they're always in setup mode, where even sending and receiving is a command, a default transmission mode acts as a bridge between the LoRa module and the USB port: whatever comes in one way is output the other. Only when the user issues a special command does the dongle switch between transmission and setup mode. I have seen some LoRa modules that do this – albeit modules targeting IoT devices, not computers – by supplying a pin or two for this purpose. Set it/them high/low and you can switch modes. But that's not exactly possible with a computer. So, a special string, unlikely to happen normally, is the way to do it. In the old days of modems, $$$ was often that "unlikely" string. So, let's use this.

In a regular LoRa application, the workflow will often be like this:

Here with RUI3, we can drop the 2nd point, as it is already done for us by the API: batteries included, as they say. api.lorawan is there for you to adjust LoRa options. The LoRa module is pre-wired (it's ours, we know what to do!). So setting up LoRa is a few lines of API calls, checking on the result:

That is a nice improvement on the days of setting up pin assignments, calling a library (one among a few, with varying degrees of flexibility, and differing syntax), and checking whether things work before even being able to set up the options. Here, it's pre-done, and the API is consistent.

Then you set up the LoRa callbacks: receive and transmit. This enables you to offload the code managing these events to a separate part of the code, in an asynchronous manner, instead of bloating the main loop() code.

So this takes care of setup(). You can add a few niceties, like if you want an OLED to check on the status, without having to switch windows, or set up LEDs (there are 2 available on the board, 1 green and 1 blue). But all in all, you are ready. So what happens next?

In loop() you check the Serial port for incoming characters, and act on it accordingly. More in a minute about this. But you also need to check on the LoRa module, and if it has a packet of data for you, you send the contents to the Serial port. As I mentioned before, a bridge between the two parts. This is often done, in other frameworks, the same way as for Serial. Poll the LoRa module, and if there's something, read it. Not in RUI3. This is done in the void recv_cb(rui_lora_p2p_recv_t data) event declared above. There you can decide what to do with the raw data before sending it to Serial. For instance, if you are expecting JSON data, you could unpack and pretty-print it to Serial. Likewise, if you know the data is encrypted, or expect it to be, you can do decrypt there before further processing. The callback looks like this:

There is a callback for Tx too, which is called when the transmission is complete. You can add stuff there, but basically its only use in a normal use-case is to make sure the module goes back to listening mode:

We'll keep the callback short and sweet, no need to prolong the return to listening mode.

When the user sends $$$ (followed by \n), the code switches to setup mode. This part is slightly more complex, and I am re-using a command system I use just about everywhere. It is very easy to reuse, and most of the work is copy-paste and changing function names and creating the appropriate code for each command. Here is the structure. First we have a struct for commands:

(cmdCount will come in handy in a minute). A pointer to the function, a name, and a help description. An array of commands is then declared:

So far so good. So at startup, in the setup() function, the number of available commands will be calculated, so that we know how many we have. cmdCount = sizeof(cmds) / sizeof(myCommand); This is used in the evalCmd function to loop through the commands.

After that it's very easy to add commands, and handle their calls. Let's have a look at the handleHelp(char*) command:

The char *param argument may or may not be needed so it's sent by default, and each command is free to use it or ignore it. The handleFreq() command uses it (of course!):

So now with this, in a few hours of coding (even less for me in this case since I just reused the Commands.h code from previous projects), we have a fully functional LoRa USB dongle. I am skipping the AES encryption part – even though I will leave it in the example project, as it is a bit more involved, and usually not part of a simple project: indeed, I usually add AES once a project is functional, so that I don't have to worry about something else breaking. But, like Commands.h, I have the AES files ready from other projects, so it's mostly a drag-and-drop and copy-paste job.

Feature creep is always an issue with developers, but let's indulge a little. What could be "nice to have" in this project, as extras? I see a few, even on such a small baseboard:

The code is available at RUI3 LoRa Companion

We have some amazing new modules and accessories for WisBlock for you. We are always listening to your feedback and ideas, so this time we are making the power supply modular.

Bernd Giesecke
6 min read
An ecosystem combined will never be overpowered and will grow together at the hands of a group of people passionate about technology—the result of the collaboration between Meshtastic and RAKwireless.